Chat with us, powered by LiveChat

Ramadan is once again amongst us with bundles of Blessings. So, Let’s pray to God to bestow politeness in our way of speaking, prosperity in our sources so we can donate more to His individuals. Ramadan Mubarak.

A little brief about Ramadhan

Ramadan is one of the main holidays for Muslims. This marks the ninth month of the lunar calendar in Islam. This month is thought of as the period of fasting for many Muslims all across the world. In this month, Muslims abstain from real demands, drink, and meals. Whereas Muslims devote themselves repent in their wrongdoings, watch self-sacrifice and spend their attention

Ramadan is a time of spiritual reflection, self-improvement, and heightened devotion and worship. Muslims are expected to put more effort into following the teachings of Islam. The fast (sawm) begins at dawn and ends at sunset. In addition to abstaining from eating and drinking during this time, Muslims abstain from sexual relations[3] and sinful speech and behaviour. The act of fasting is said to redirect the heart away from worldly activities, its purpose being to cleanse the soul by freeing it from harmful impurities. Muslims believe that Ramadan teaches them to practice self-discipline, self-control,[47] sacrifice, and empathy for those who are less fortunate, thus encouraging actions of generosity and compulsory charity (zakat).[48]

Exemptions to fasting include travel, menstruation, severe illness, pregnancy, and breastfeeding. However, many Muslims with medical conditions[vague][who?] insist on fasting to satisfy their spiritual needs, although it is not recommended by hadith.[citation needed] Those unable to fast are obligated make up the missed days later.[49] 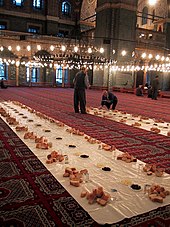 At sunset, families break the fast with the iftar, traditionally opening the meal by eating dates to commemorate Muhammad's practice of breaking the fast with three dates.[52][53][citation needed] They then adjourn for Maghrib, the fourth of the five required daily prayers, after which the main meal is served.[54]

Social gatherings, many times in buffet style, are frequent at iftar. Traditional dishes are often highlighted, including traditional desserts, particularly those made only during Ramadan.[example needed] Water is usually the beverage of choice, but juice and milk are also often available, as are soft drinks and caffeinated beverages.[55]

In the Middle East, iftar consists of water, juices, dates, salads and appetizers; one or more main dishes; and rich desserts, with dessert considered the most important aspect of the meal.[56][citation needed] Typical main dishes include lamb stewed with wheat berries, lamb kebabs with grilled vegetables, and roasted chicken served with chickpea-studded rice pilaf.[citation needed] Desserts may include luqaimat, baklava or kunafeh.[57]

Over time, the practice of iftar has involved into banquets that may accommodate hundreds or even thousands of diners.[58] The Sheikh Zayed Grand Mosque in Abu Dhabi, the largest mosque in the UAE, feeds up to thirty thousand people every night.[59] Some twelve thousand people attend iftar at the Imam Reza shrine in Mashhad.[60] 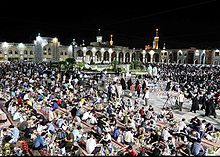 Iftar serving for fasting people in the Imam Reza shrine

Men praying during Ramadan at the Shrine of Ali or "Blue Mosque" in Mazar-i-Sharif, Afghanistan

Zakāt, often translated as "the poor-rate", is the fixed percentage of income a believer is required to give to the poor; the practice is obligatory as one of the pillars of Islam. Muslims believe that good deeds are rewarded more handsomely during Ramadan than at any other time of the year; consequently, many[who?] donate a larger portion—or even all—of their yearly zakāt during this month.[citation needed]

Tarawih (Arabic: تراويح‎) are extra nightly prayers performed during the month of Ramadan. Contrary to popular belief, they are not compulsory.[61]

Recitation of the Quran

Muslims are encouraged to read the entire Quran, which comprises thirty juz' (sections), over the thirty days of Ramadan. Some Muslims incorporate a recitation of one juz' into each of the thirty tarawih sessions observed during the month.[62]

PHPTRAVELS is back to office and normal routine

How to Become a Travel Consultant